“NEWGATE’S ANSWER TO THE RECESSION” 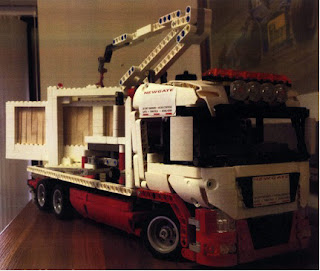 Newgate transports it’s electric sliding gates all over the country using specialist vehicles fitted with Hiab cranes.  These vehicles are extremely versatile, but extremely expensive.   The answer – Build your own!


The builder of the one and only Newgate lorry wishes to remain anonymous, for obvious reasons.  However, he does confirm that the vehicle is motorised and
the crane also works.  The “load”, namely the Type 1 Sliding Gate, also moves.


Future Project – A New Factory!..................  I don’t think so, the first project was interesting, but beyond this it would be classed as being an “anorak”.  Hmmm!  Just think about it though – motorised Lego Traffic Barriers, Blockers, Turnstiles? – Maybe not.